The central idea of yoga is to live happily

Home/health/The central idea of yoga is to live happily

The central idea of yoga is to live happily 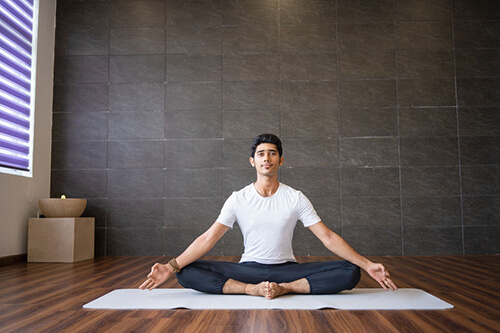 Taking a look at the past few years, yoga has come a long way! No matter where we go, we’d find people talking about taking yoga classes or the various benefits that yoga provides us with! Yoga has evolved a lot, from the early Vedic periods to the 21stcentury, in both physical as well as mental aspects! For some of you, picturing yoga might be an image of people turning and twisting in the most impossible ways, popping into your head, and for the others, it may be an image of people closing their eyes and stretching themselves with calming music playing in the background.

While yoga asanas are immensely effective and rejuvenating, yoga is more than just asanas and weird poses. It dates back to a few millenniums!

While we are here, let us learn about the benefits that yoga imparts:

Many concerns are raised, at times considering the “right age” to start yoga or if there is an age limit for people to do yoga! Yoga is a kind of exercise that can be done by people of any age, whatsoever, starting from the age of 5! A person as old as 90 years of age can also perform yoga if he has that kind of flexibility.

What differs with age are the yoga forms and postures and the reason behind this is quite simple. Our body’s capacity to move and flex changes with age and therefore the requirement of different yoga poses changes accordingly.

Yoga is a lifelong practice that will provide you with the secret of staying fit and healthy for the years to come. One of the most difficult, but at the end of the day, most liberating things about yoga is letting go of your ego and accepting the fact that everyone stands on the same plank. Its spiritualism and rejuvenating nature not only does wonders for your body but also frees your mind!